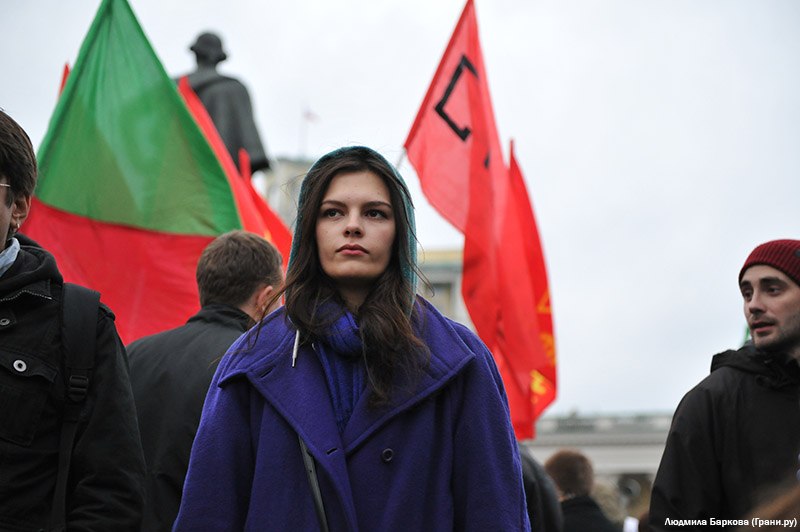 A few hours ago, we learned of two more arrests in the May 6 case.

Nikolai Kavkazsky, an activist with the Committee for Civil Rights, was met by Moscow police investigators in the stairwell of his building as he was returning home. Kavkazsky’s apartment was searched, and his computer and laptop were confiscated. He was then taken to Petrovka 38 [Moscow police HQ] for questioning, where he remains as of this writing. At the moment, we know that he is a suspect in the Bolotnaya Square case and has been charged with Article 318 of the Criminal Code (violence against a police officer).

The second person arrested is 21-year-old Alexei Polikhovich, who is a student at Russian State Technological University and employed. In his blog, he actively encouraged friends to come to the July 26 rally, not knowing that he would be the next defendant in the Bolotnaya Square case. Alexei is now at Petrovka 38 waiting for his custody hearing. I would like to hope that he would be released on his own recognizance, but, unfortunately, there is a very good chance that the court will treat him as it has eleven other defendants in the case and remand him to a pretrial detention facility for several months.

They usually come at night or early morning. They lie in wait for some on the stairs; in the case of others, they politely ring the doorbell. They often knock out the fuses so that the person goes out into the stairwell, where they can pounce on him. They come with guns, throw people on the floor, yell obscenities, conduct searches and confiscate all electronic devices. Then the interrogations begin, accompanied by insults and threats, and pressure on relatives. The person is then taken in handcuffs to court, where he or she sits like an animal in a cage under the watchful supervision of four riot policeman, sometimes with a dog. The prosecutor has a single answer to any argument made by defense lawyers: the suspect will continue to engage in criminal activity and put pressure on witnesses. Bail is denied, and the suspect gets another four months in jail, in a cell for six.

The worst thing about these detentions is that the powers that be are able to show us how submissive we are. How we can easily accept that people who recently marched with us to Bolotnaya Square hoping to change something are now in jail. Almost no one attends the court hearings or pickets the Investigative Committee. Seven venues (which style themselves as protest-oriented) turned down our request to hold a charity concert in support of the prisoners. The people who seemingly should be leading thousands into the streets to demand freedom for the prisoners do nothing. When a society is so indifferent, maybe nothing needs to be changed? Maybe it deserves the government it has?

I know that if they are convicted and sent to prison, I’ll always feel that I didn’t do everything possible to keep these people free, to ensure that their children didn’t grow up without fathers, to prevent the chemist Fyodor Bakhov‘s career from being destroyed, to keep Mikhail Kosenko alive and well, and make sureMaria Baronova‘s son was not taken from her. And I hope that I’m not the only one who feels this way.

A protest rally will take place today, July 26, at 7:00 p.m. in Pushkin Square [in Moscow]. Protests will be held at the same time in Paris, London, New York, Amsterdam, Israel, Berlin, Cologne, Perm, Kyiv, Penza, Rostov, Kaliningrad, Saint Petersburg and a dozen other cities. Anyone can also go to a Russian embassy or city administration building and express their attitude to the tyranny now unfolding in Russia.

Isabelle Makgoeva is an activist with Occupy Russia and the Russian Socialist Movement, and an organizer with the May 6 Committee.

Isabelle Makgoeva, “What Else Have You Learned to Ignore?” (On the Prisoners of May 6)