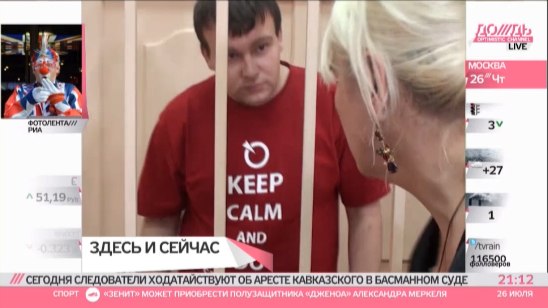 18 April—Day of solidarity with Nikolai Kavkazsky. Nikolai, who earlier had actively given help to those held in the Bolotnaya Case, was himself arrested. Since July 25, 2012, he has been held in prison.

Nikolai finished school as a cellist and had prepared to become a musician, but his love for national history and the law outweighed that, so he went to law school.

Nikolai is a hereditary intellectual; his parents are musicians. He is young, but already well known as an activist and human rights defender. He positions himself as a left social-democrat. As a lawyer and consultant for the human rights organization “The Committee for Civil Rights,” Nikolai defended the rights of prisoners, the disabled, pensioners, followers of non-traditional faiths, and sexual minorities. He opposed infill development and supported environmentalists. Nikolai was a former member of the youth branch of the party Yabloko, ran for the State Duma, and worked in the precinct and territorial election commissions. Before his arrest, Nikolai supported “the prisoners of May 6”: he demonstrated in a picket supporting them before the Investigation Committee.

Natalya Kavkazskaya says about her son: “He tried to defend the defenseless. It’s probably his nature: some people are born doctors, others—human rights defenders. He’s a romantic, a dreamer, wanting universal harmony and for everyone to be equal before the law.

On May 6, Nikolai wasn’t detained, but about 3 months later they came to him with a search warrant that was more like a seizure; Nikolai himself gave them the things he was in at the sanctioned rally.

In Nikolai’s case, there is no victim, insofar as the investigation hasn’t found an officer who allegedly suffered at his hand. Kavkazsky is charged with “beating a member of the riot police with hands and feet,” the basis for which is a video, in which it is clear that he is being beating with a club by a member of the police, as well as testimony from the person taking this video. Nikolai is charged in only one article: participation in mass disorder.

In no way did he commit any law-breaking on Bolotnaya Square. “We walked together in the column, he shouted slogans, that’s all. At the time of the march, he told us not to engage in confrontation with the riot police, and he himself left the rally immediately, as soon as he found out that a sit-in had begun,” say those who were near Kavkazsky on May 6. Those who know Nikolai from his political activities uniformly say that he was always a supporter of non-violent action.

The other day, Nikolai was transferred to the hospital of the prison “Sailor’s Silence,” because problems with his health had developed. He complained of headaches and liver problems. Nikolai suffers from rheumatism, scoliosis, respiratory failure, heart disease, gastritis, allergies, dermatitis. His stay in prison has already significantly worsened his health. Kavkazsky has been a vegetarian for four years, so he can’t eat prison food.

Despite the hardships of prison, Nikolai hasn’t lost his optimism and a healthy sense of humor. He sends greetings to his comrades and expresses himself on various political subjects. He reads a lot. He writes letters and articles. Nikolai is a truly kind and generous person who doesn’t hold a grudge against enemies. He chats with the investigators and even advises them on historical questions.

Support Nikolai Kavkazsky—a humanist and a romantic who believes in the bright future of his country!