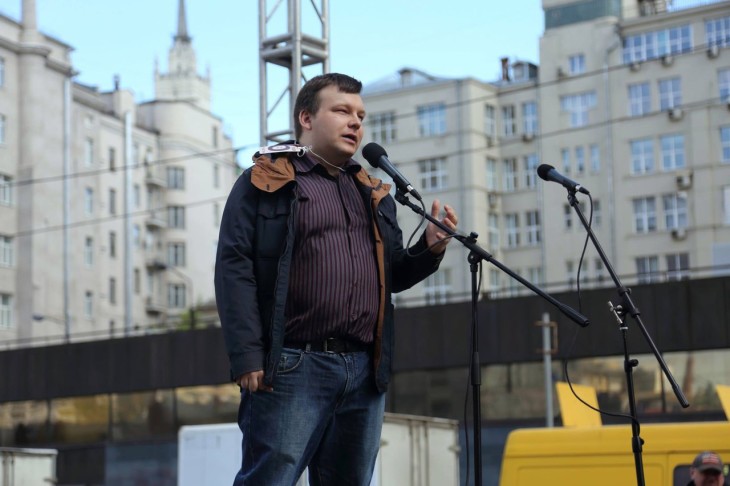 YABLOKO member, ex political prisoner Nikolai Kavkazsky participated in a round table on “The problems of Constitution enforcement in  Russian courts” initiated by the Committee For Civil Rights [headed by YABLOKO’s Andrei Babushkin, a prominent human rights advocate].

Kavkazsky started with his own experience of participation in court sessions both as a counsel for the defence and a defendant charged with administrative cases and the Bolotnaya Square rally criminal case.

“The Russian courts practically disregard the Constitution except for the Article 51,” said Nikolai Kavkazsky. [No one shall be obliged to give evidence against himself or herself, for his or her spouse and close relatives, the range of which shall be established by the federal law].

He also gave several examples of the articles which the Russian courts disregard.

According to Article 21, no one shall be subject to torture, violence or other severe or humiliating treatment or punishment. From my own experience such appeals from the citizens on the use of tortures against them on behalf of law enforcement agents don’t reach court [as they are suppressed at the investigation level]. Therefore the courts don’t put Article 21 in practice.

According to Kazkazsky, Article 22 of the Constitution is disregarded as well. [Arrest, detention and remanding in custody shall be allowed only by court decision. Without the court’s decision a person may not be detained for a term more than 48 hours.]

“I dealt with the case when a period of detention of a person under investigation expired. Only after six days period the court prolonged the detention period which means the man was unlawfully kept in per-trail detention centre for nearly a week. The court simply ignored Article 22 of the Constitution,” stated Nikolai Kavkazsky.

He also said that Article 31 which grantees the right to gather peacefully, without weapons, and to hold meetings, rallies, demonstrations, marches and pickets is violated as well.

Another Article ignored by the Russian courts is №48:  Everyone shall be guaranteed the right to qualified legal counsel. Legal counsel shall be provided free of charge in cases stipulated by the law.

“This can be observed when the judge frequently prohibits to communicate with  defendants or pass them the documents at a court session. Not to say when they defendant participates in a court session by means of  visual communication,” said the human rights advocate.

Kavkazsky made a special reference that the Article 49 [everyone charged with a crime shall be considered not guilty until his or her guilt has been proven in conformity with the procedures stipulated by the federal law and established by the verdict of a court of law. The defendant shall not be obliged to prove his or her innocence.The benefit of doubt shall be interpreted in favor of the defendant] is enforced vice versa.

The same thing is with Article 50 [No oe may be repeatedly convicted for the same offense. In the administration ofjustice no evidence obtained in violation of the federal law shall be allowed].

“The violation of this article took place within the Bolotnaya Square rally case when a number of the defendants were charged with an administrative article and then a criminal case was brought against them. Also, absolutely inadmissible evidence and falsified video records formed the basis of the sentence,” summed up Kavkazsky.